In switching power supply (SPS) design, it is common that bulk capacitors are used to reduce ripple voltage twice the supply frequency at the output and to improve output voltage stability against power sag. However, bulk capacitors typically require a large amount of current to charge up upon initial start-up, resulting in a large inrush current. To minimize that undesired transient current, the majority of SPS designers utilize negative temperature coefficient (NTC) thermistors as a main component of the inrush current suppression circuit. The drawback is that NTC thermistors consume energy continuously while operation, not only generating heat but also having an impact on SPS’s efficiency. As a result, the resistance value of NTC thermistors cannot be too high and only can limit inrush current at a certain range, 15 - 20 times of the rated current, which some users find unacceptable. The ICL-16 series which is the exact antidote for applications that demand a low inrush current will be discussed more in the following articles.

ICL-16 is a 16A inrush current limiter, which can be used to reduce the temporary peak current caused by capacitive loads, such as power supplies. Adding the inrush current limiter after the AC circuit breaker can effectively reduce the chance to falsely trip the AC circuit breaker when turning on AC loads, increasing the overall reliability of the system. The ICL-16 consists of three parts, i) a cement resistor “R”, which eliminates the downside of NTC thermistors that resistance decreases with increasing temperature, now inrush current can be kept at the same level at higher room temperature; ii) a bypass relay, which is used to short-circuit the “R” once its suppression job is done and is triggered by iii) a control circuit, shown in Figure1. This circuit combination significantly reduces the heat generated during operation and improves the suppression ability, thus differentiating the ICL-16 from other inrush current limiters that use NTC thermistors.

There are DIN rail type ICL-16R and linear type ICL-16L proposed to fit different applications, shown in Figure 2 and Figure 3. For detailed information, please refer to its specification on the website (https://www.meanwell.com). Figure 4 illustrates the application diagram.

Calculation of the ICL-16 Series

The following sections describe the calculation of the number of power supplies that can be connected to the ICL-16. According to the specification, two key parameters should be taken into consideration regarding the calculation of supplies that can be installed after the ICL-16, AC continuous rated current and allowed capacitive load. Below is an example of ICL-16R with SDR-120-24 that is to guide you through steps to manage a calculation. 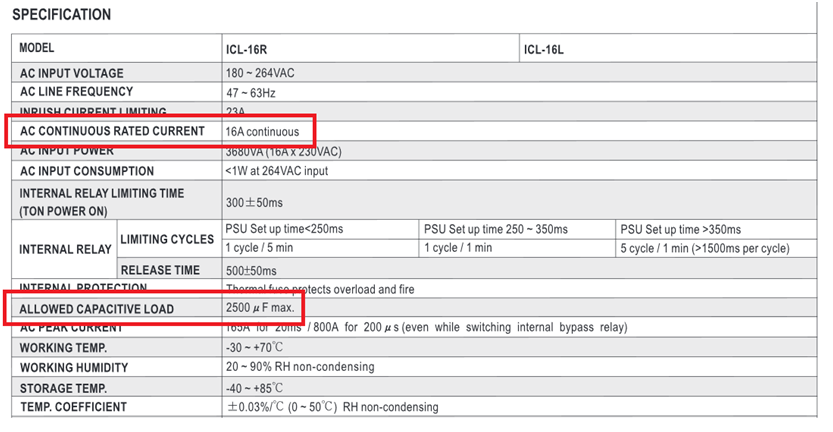 According to the specification of the SDR-120, AC current is 0.7A/230Vac at full load conditions.
There is a simple formula for calculating AC current, where AC continuous rated current of the ICL-16/ AC current of the device = 16A/ 0.7A = 22.8 → 22units (round down decimal places)

According to the test report of the SDR-120 series, the capacitance of the bulk capacitor “C5” is 100μF. 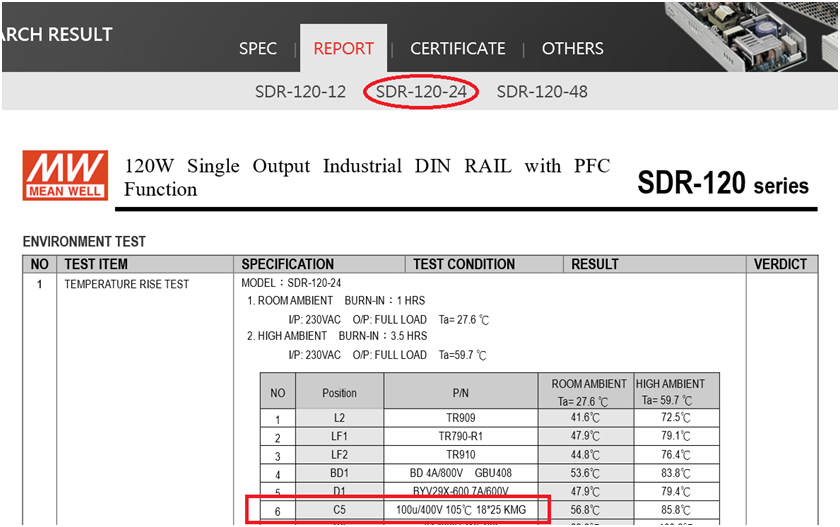 There is a formula for calculating capacitance, where allowed capacitive load of the ICL-16/ capacitance of the device = 2500μF / 100μF = 25 units (round down decimal places)

Select fewer units by comparing calculated results from STEP 2 and STEP 3 then multiplied by a coefficient of 0.9 to determine a number.
22*0.9 = 19.8 → 19 units (round down decimal places)

STEP 5:
Finally, configure a system with 19 units of SDR-120-24 and verify its reliability.


Introduction and Selection of the Circuit Breakers


The next section gives an overview on circuit breakers and the selection of a suitable circuit breaker.
(A) Introduction
A circuit breaker is an automatically operated electrical switch which is predominantly utilized as an over-current protection device to protect electrical/electronic equipment from damage caused by overload or short circuit. Its applications can be seen in many fields such as manufacturing industry, where circuit breakers are commonly used as a protective function for motors.

(C) Specification
Typically the following items are specified in a MCB specification.

(D) Selection Methods
When choosing a MCB for your power supply units (PSUs), you should follow the 2 rules below:

According to the calculation above, there are 30 units of the HLP-80H that can be installed in the system. In fact, we did the aforementioned arrangement and the MCB remained closed after being turned on. If you do a calculation without a coefficient of 1.25, the units that can be used in the system are 37. However, the result we found is that the MCB was tripped by connecting 36 units of the HLP-80H to the system. In addition, the data mentioned above is based on a 25°C environment. If your system is used in a higher ambient temperature location, please refer to the ambient temperature correction curve of your MCB to de-rate the rated current (In) of the MCB.


A suitable miniature circuit breaker (MCB) should be considered as MEAN WELL power supplies are connected to a system. This is because an appropriate MCB can prevent systems from immediately tripping when it is turned on. If it is difficult to select one single MCB for a system with a high input current, it is suggested that divide the system into several smaller systems with a lower input current and then choose available MCBs for these smaller systems.

Inrush current is an inevitable phenomenon while start-up of SPS. If the current system can falsely trip the CB, it is a good choice to add ICL-16 before the system to limit the inrush current.